We continually narrate to ourselves and to others, ourselves, things, life, reality. We could say that everyone is naturally a historian who tells his own story and the story of his time and the community of which he feels part.

By “Generative Narrative” we mean a narrative with a voluntary and conscious orientation. In the process of activating a conscious and oriented narration, a crucial step is the relativization of the narratives/historiographies, that’s to say their historicization, the awareness of the associations between narratives and contexts that produced them. Orientation is a position, the best possible from which to see more and better, more clearly.

In our time the best position from where humanity looks at itself and the planet it inhabits has produced a plan, described by the 17 objectives of the UN 2030 Agenda for Sustainable Development. Sustainable development is our orientation, what is useful, indeed necessary, to preserve our home Earth, and to evolve.

Moreover, the landscape, which is the privileged object of the UNESCO Chair’s investigation, incorporates and conveys the representations of existence made by the communities that inhabit it. And since landscape is the face of the territory, it is also one of the best indicators of its state of health. In this sense, the Mediterranean Landscape Observatory, the work line of the UNESCO Chair in which the WUC project is located, becomes strategic for observing/designing a territory, and narration is its main tool.

The European Landscape Convention has among its objectives the harmonization of the different administrative levels of government of the territory, the knowledge and awareness of the landscape within society, the protection and design of the landscape in a sustainable development perspective.

Specifically, “Generative Narrative” is the development of a method to observe the landscape in order to extract its character, its special quality, the stratification of the figures, the interference between memories and project, with the orientation towards sustainable development.

In fact, changing a narrative makes it possible to rebuild the meaning of a place, the imaginary about it, producing a new attribution of meaning. Changing the narrative of a landscape can make possible a new development project for the territory and the community.

The “Landscape Generative Narrative” is a guiding idea expressly contained in the WUC project and a research line of the UNESCO Chair.

The chosen language is the audiovisual one as the most widely used and enjoyed narrative tool of our time and as a privileged vehicle of narration in the digital age, in which everyone not only enjoys but continuously produces digital moving images.  The use of the most widespread digital technologies is also foreseen for audiovisual production, with which to experiment Social Impact Storytelling methods and Collaborative Filmmaking processes, but also an approach with immersive technologies.

As part of the research line about “Landscape Generative Narrative”, there is a winning and funded industrial PhD project entitled “Narrazione generativa del paesaggio e nuove tecnologie”  on PON 2018-19 calls for proposals. The research project proposes the development of a Technology for Cultural Heritage, defined by the interweaving of some effective methods and historiographic tools for the reading of the landscape as a cultural phenomenon, with the creative potential of the filmic language and the technical and compositional tool of the audiovisual, using current digital technologies (high definition 4K and 8K, augmented reality, drones, videomapping), to create an immersive rather than passive story, in the wake of the “Italian way” to the artistic documentary that combines the scientific value with the spectacularity of images. Moreover, one aspect of the research concerns the potential of amateur audiovisual production with digital technologies accessible to most people as a tool for new forms of participation from the bottom up to cognitive processes, enhancement and design of the landscape as cultural heritage. The research investigates the ways in which digital technologies produce technical-linguistic novelties and changes in the audiovisual production process.

To consciously produce a change of narrative requires procedures and tools. It is necessary to historicize the narration, because to historicize is to relate, to put in a relative perspective what can appear absolute. In the project, passing from the automatism of technical solutions to the understanding of the context in which the narration was formed, it becomes possible to choose how to use the context, or even operate to produce the desired context.

As part of the teaching and research activities of the UNESCO Chair, tools are developed and tested to facilitate the steps described. (Please refer to the methodological research of A. Colonna, “Genealogia del presente e storiografia dell’architettura. Appunti dalla didattica e per la ricerca”, Calebasse 2015 and the activity of the Educational Laboratory of Genealogy of Architecture, coordinated by A. Colonna, in the Course of Architecture Studies of the University of Basilicata). 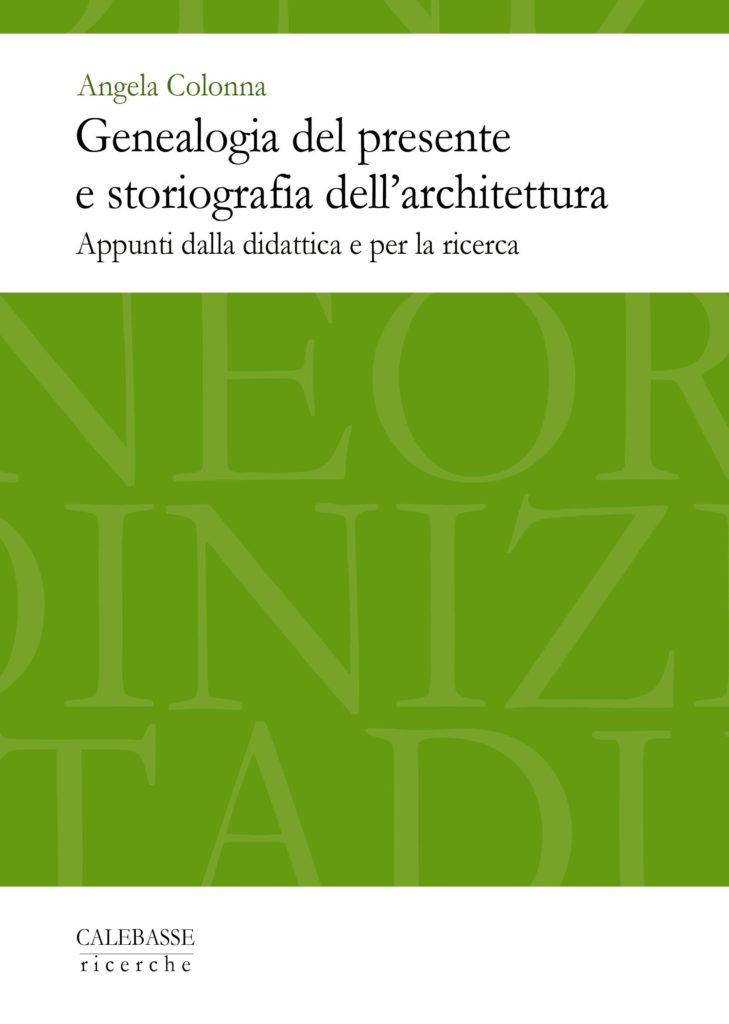