The “Preparatory Workshop of the Opening Conference”, held in Matera on 26 June 2017, allowed the meeting among UNESCO Chair, partners and local institutions. The theme of the preparatory workshop was “L’osservatorio per la gestione del paesaggio culturale: buone pratiche e sinergie“.

All participants focused their attention on the management of Cultural Landscapes with shared and participatory sustainable governance strategies, with effective relationships between cognitive research, action design and process governance. 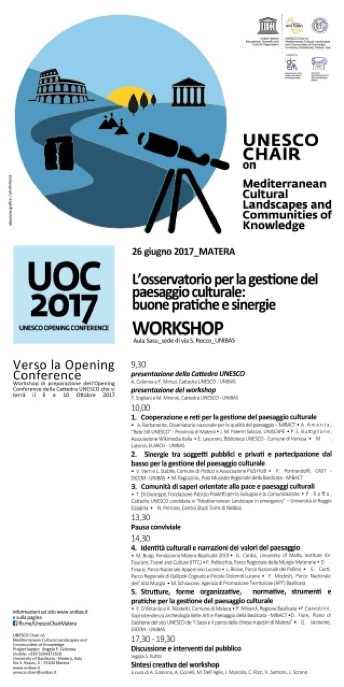 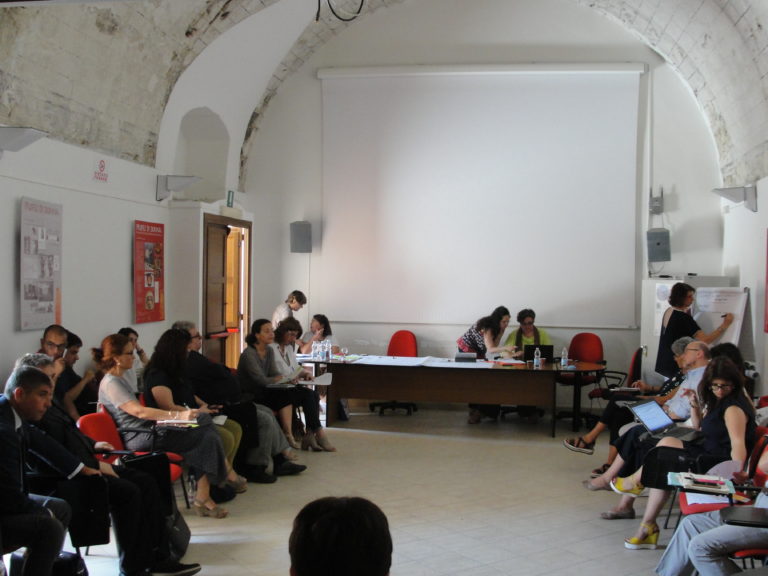 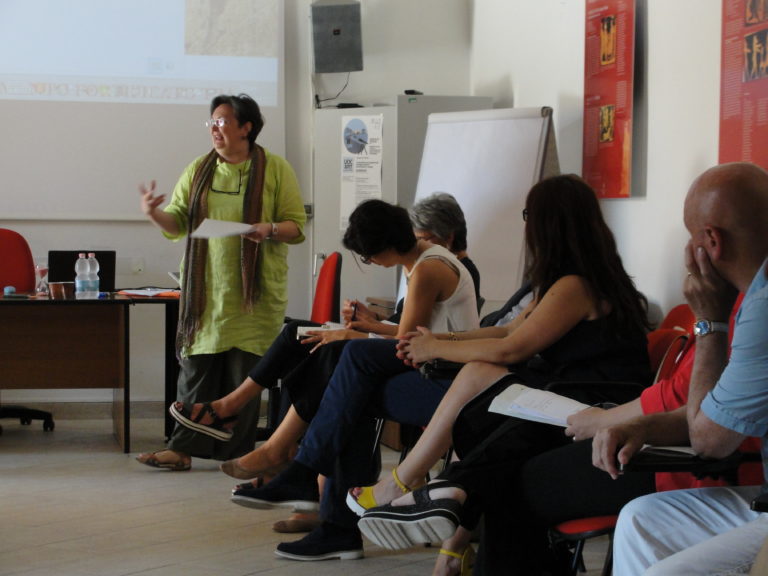 The UNESCO Chair officially started its activities with the Opening Conference, after two preparatory initiatives carried out during the same year 2017: the first one, carried out during the whole month of March, was the training activity “WUC-Weeks of UNESCO Chair ” on the narration of the Mediterranean Landscape, the second one was the “Opening Conference Preparatory Workshop”, on June 26th, where the UNESCO Chair met the partners and the territorial institutions.

The Official Opening Conference of 9 and 10 October 2017 was held in an interactive way, both in plenary and in groups. In this context, the UNESCO Chair met the partners with the aim of sharing common ideas and strategies. The two days of work were organized including a “Seminar in route” of UNISCAPE (European Network of Universities for the implementation of the European Landscape Convention), partner of the UNESCO Chair.

The workshop sessions of the Conference were flanked by a frontal session composed of 4 interventions on strategic themes for the UNESCO Chair. The first theme concerns the outer landscapes, i.e. the landscapes in which we live: Claudia Cassatella (Politecnico di Torino – UNISCAPE) with a report on “Osservatori  del Paesaggio in Europa“, with its many skills and facets, its complex articulation, the variety of subjects that inhabit, govern, study and enhance a territory; Fabio Di Carlo (Università La Sapienza, Rome – UNISCAPE) on the multiple “Saperi del Paesaggio”“, and their interweaving. The second theme shifts the attention to the other aspect that the UNESCO Chair deals with: the invisible aspect, that is our inner landscapes, which constantly intertwine and interact with the outer ones. “Scenografie dell’anima” is the title of Patrizio Paoletti’s (Fondazione Patrizio Paoletti per lo Sviluppo e la Comunicazione) intervention, to investigate the creation of our internal architecture in relation to signs, and the system of representation within ourselves within life, things and people. Tessa Matteini (Università di Firenze – UNISCAPE), finally, on “Progetti narrativi per paesaggi stratificati“, an aspect that highlights the crucial role of narration, that which connects internal and external images, invisible and visible.

The conference was attended by: Enrico Vicenti, Secretary General of the Italian National Commission for UNESCO; Paolo Ceccarelli, coordinator of the network of UNESCO Mediterranean Chairs; Fiorella Fiore, Regional Representative for Basilicata Region of the UNESCO Youth Committee.

The activities of the Opening Conference were presented and facilitated by the team and working group of the UNESCO Chair, and all participants were able to offer their contribution.